We did it! We went camping with a baby!

Last weekend, we took David on his longest car ride yet and his first camping trip! He fussed the first 30 minutes in the car and we almost turned back, but thankfully, we powered through it and made our way to the Shenadoahs for a Blue Ridge Overnight.

I pulled the map off another website (Midatlantic Hikes). You’ll see the campground loop at the bottom where you can also see the Appalachian trail (white line) loop around the campground and mountain ridge.

We drove up on Saturday morning with a friend of Sara’s who was visiting with her 4 and 1/2 year old son from Switzerland. After several pit stops for bathrooms, breast feeding, diaper changes and gas, we managed to find a tent site at Loft Mountain Campground in the Shenandoah National Park.
For essentially having no plans, it couldn’t have worked out more perfectly. We found a nice site that gave us some extra space, set up our tent and went for a short hike before making a fire and having dinner. 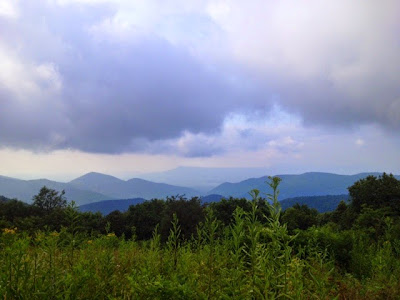 The trail encircles the campground. All in all, we hiked about 2 miles. A perfect easy hike through the woods and mountain ridge provided spectacular views of the Blue Ridge Mountains. 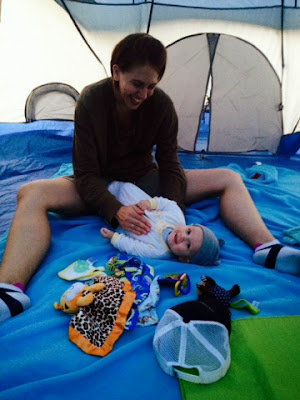 After making a fire, roasting hot dogs and s’mores, we all called it a night. Our Coleman tent (borrowed from Kevin over at Sweet and Salt was spacious and cozy at the same time. We set up a Pack-n-Play in the tent for David and he did great while Sara and I cuddled up on the floor. 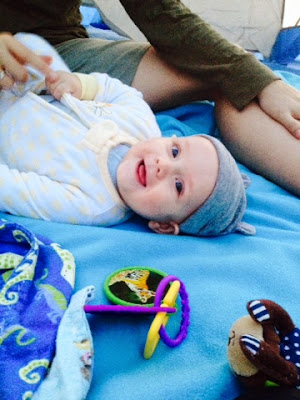 On a side note, Nicole, Sara’s friend was worried we’d see a bear. I told her not to worry as it was pretty rare. Also, the ranger at the station told us, as long as we store our food properly, it won’t be an issue because there are plenty of raspberries and apple trees for the bears to munch on. As we got the fire going we stopped to fully absorb our home for the night only to notice we were surrounded by berry bushes and covered by a canopy of apple trees 🙂 We laughed a lot about that, but not too worry, there were no fuzzy, big-pawed visitors.
We woke early, as we always do with baby David, to have a nice breakfast and start our morning hike to the Doyles River Falls. It got hot fast and the kids were heavy (yes, Nils, needed up needing carrying too). So we trudged back up the mountain and enjoyed lunch before making the drive home at midday.  It was a short and perfect trip. I enjoyed a re-broadcast of Prairie Home Companion while everyone snoozed most of the way home.
“I don’t recollect I’ve ever told you about Ol’ Reliable before?”

Just because you go to the Boundary Waters Canoe Area (BWCA) in the summer doesn’t mean you will have summer weather. Any day it can be hot and humid, asking for bare skin and cool dips in the lake, or frigid and damp pushing you into a sleeping bag all day long. I’ve been to the BWCA and seen each of these scenarios and everything in between. The one thing I always hoped for, was a breeze. A nice breeze means fewer bugs. Even with perfect weather, biting black flies, horse flies, and mosquitos can challenge what would have otherwise been a perfect trip. All of these things, the bugs, the elements, the hard work paddling to your campsite, drain you. You feel tired in a good way, but tired none-the-less. But for some reason, when you are that exhausted, a warm meal is all it takes to fuel you for another long day.

Every morning and night of those trips we had that green, metal, Coleman 2-burner stove that everyone is so familiar with, wind guards flapped, ready to boil water for anything from hot chocolate to cheese tortellini. The stove was a dependable companion that I never doubted for a second. At the time, I suppose I took it for granted.

That stove we used in the BWCA was a good friend’s. My parents had one as well. They provided us with many a hearty meal. As I have grown and began camping on my own, I started to pick up my own gear. A sleeping bag here, water bottles there, eventually a tent, and finally a cook set. When I was deciding on a stove, I spent a long time trying to figure out which one I wanted. What was most important to me was dependability. I wanted to know, when camping any month of the year, I could count on my stove to heat up some tea, soup, or tuna helper with out any issues.

Eating while camping can be a second thought or a show stealer. I don’t want my cook stove to stop me from having an awesome meal. As such, it is no coincidence Coleman stoves have been a mainstay in my campsite cooking. Truth to be told, I can’t imagine that changing any time soon.

“Sponsored by Coleman and hosted by the Outdoor Blogger Network, this is my submission for the Coleman Camping Heritage Essay Contest.”

So, are you ready for this? Are you ready for a whirlwind recap of to sweet trips? This is your chance to either 1. turn around and walk away with your chin held high 2. just skim through the photos to get the gist or 3. dive right in and follow detail by detail. Choose your own adventure and lets go.

Last Thursday, I woke at 4am to a meowing kitty. “Okay. Okay.” I said. “You’re right. I should get on the road.” I made the 14ish hour drive (according to google maps) from Omaha to Fort Smith, Mt in a little over 12 hours. After buying my fishing license at the Cottonwood Camp fly shop, I was in the water and fishing by 5:45pm. tips for cutting down driving time: pee in a bottle while driving or while pumping gas. bring along a pizza for food. get an interesting book on cd to stay awake. oder good driving weather.

I basically fumbled around for about 2.5 hours looking foolish and exploring the area. For one brief moment, everything came together. I mended a great cast, laying my orange scud and zeebra midge accross a seam that was practically drawn with a sharpie. My indicator twitched. I set. And the fight ensued. I pulled in a 16-17inch brown. Beautiful and strong.

I missed a couple other takes that night, but was happy I was able to come away with some success.

The next day we hammerd the fish. We saw a bunch of redds while heading down the water indicating the fish were getting their spawn on. Our group of seven guys split up into 3 groups and each had a guide. Expensive but highly reccommended for a first day fishing the water. It sets you up for much greater success the rest of the days. The water was only 37 degrees and flowing at 3600cfs, but it the fish stayed in relatively fast water. It wasn’t until late in the afternoon they started sliding back to the slower stretches. They were hitting fire beads, sow bugs, red midges, orange/grey scuds, san juan worms, and zeebra midges. My last fish of the day was a beautiful rainbow with a healthy belly. Great fish.

The next two days, things slowed down quite a bit. We had an inch of rain after our first day, and the fish hunkered down. I caught most of my fish on the red midges (size 18) and orange scuds (size 16) that I had tied. I was told these were much too big, but the fish were just as interested in what I had to offer as anyone else in our group. That felt great to tie something useful.

On one of my walks along the shore I found something that Jay from the Naturalist’s Anglemight be interested in. It was peaking at me from inside a thicket. Any thoughts, Jay?

Throughout the weekend, we saw plenty of midge hatches, but the fish were rising inconsistently. Some of us in the group were expectantly waiting a baetis hatch, but none came. The days progressively got warmer, but also sunnier and windier, keeping the hatches at bay.

Our last day was windy as all get out but we still managed to finish it off with a hot pool getting most of the guys in our group 3-4 fish in the last hour or so.

On Monday morning, I was the last one to leave. I got packed up and headed down to Denver to meet some freinds. It was a quick stop. I got their, transfered gear, and jumped in their car as we got on our way to Arches National Park for a few days of climbing and hiking.

We got ourselves a camp sight and made our way to the top of Elephant Butte and through Dragonfly Canyon in the first day. It was gorgeous. The only hitch in the day was when I nailed my upper tibia on a submerged rock as I tried to jump across a pool of water in Dragonfly. There were several of these pools. It is necessary to swim through them, but I thought I could at least jump close to the far side and avoid fully submerging my self. Nothing broke besides a little of my spirit 🙂

After some rest, antiinflammatories, and compression, we spent the next day hiking a route called Lomatium in the Firey Furnace area of the park. The height of this was the 140ft repell. Spectacular. After that, we had a little time to see the Delicate Arch around a cloudy sunset. Another amazing day.

We capped it off with a morning doing a short hike with three great repells. This was Tier-drop. The 130ft repell in this was amazing because it gave you a far view of the park and another canyon.

If you’ve stayed with me this long, I’m thankful. It was two awesome trips (I use that word with it’s intended meaning “full of awe”).

Now back in Omaha and back to “normal” life. I’ve got lists to get through and work to be done, but hopefully, I’ve sewn a seed that I can revisit in the years to come.