Skip to content
It is pretty awesome when you move outside your fishing bubble and meet new people. You never know what you might learn. For instance, I learned I have a wadable stream not to far from where I live that supports a healthy musky population. I also learned how to tie articulated flies (which, by the way, big brown trout also seem to like).
The musky season in Wisconsin runs May through December. I didn’t start my search until the last days of November. The last couple outings were in snowy cold weather.

I essentially spent time looking for dark water. Deep pools where big musky might be waiting to ambush unsuspecting prey.

Lots of bushwhacking and exploration over several short trips yielded no follows or fish seen. 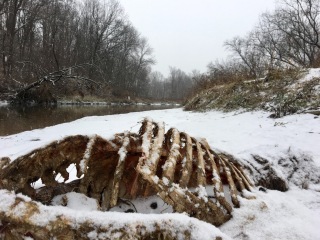 Dead Dear Run is one of my favorite spots on this new found stream. Named as such for obvious reasons.

Lots of frozen guides and cold fingers until finally… finally…

I caught my first musky on the fly. He took it right at my feet. It was so fun to watch. No too big. Maybe a little over 25′ (though, naturally, he gets bigger every time I tell the story).

Big hunks of meat for these big toothy fish. 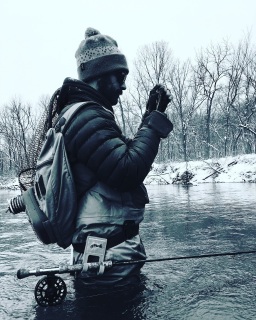 Here is @normalicious showing off his o’pros dragonfly rod holder. they are handy in certain situations. I like when standing in a stream and tying on a new fly. Sometimes line get’s caught up in it, but in general, it is a nifty too to add to the arsenal. easy stocking stuffer too.

I just got my early Christmas present. A custom guitar strap from Lenny Kenny leather. Here’s hoping this inspires as much music as there is snow falling down outside our home.