So last weekend I made it out to Little Papillion Creek (I think that is what it is called) by 132nd-ish and Fort-ish. It was another stunningSunday. (The weather really has been beautiful in Omaha lately.)My plan was to walk the creek upstream in search of rises and possibly catching some fish. I new it would might be a mirky creek, but I read a Papillion Creek Water resources management page that mentioned the potential for fish. I figured it was worth a shot since I haven’t been catching anything at Standing Bear.

I basically walked up the stream for about 2 hours cas
ting a San Juan Worm, hoping it would catch some attention. I didn’t see any top-water action, so I didn’t feel the need to switch to a dry fly. Besides the pretty scenery, and occasional teaser pools, I didn’t see a thing. The water was SO muddy. I stepped in a couple times and immediately slid into 4-6in of silt. Thank you Nebraska farm run-off.
I decided to take a short break and just sit for a while. 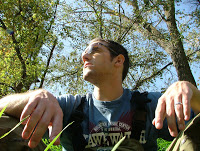 I have to admit, I was frustrated with four consecutive outings without single fish. I had one great strike weeks ago at Standing Bear and I pissed that away, no problem. Fishing is a lot better if you are catching fish. And if you aren’t going to catch anything, it is at least nice to have dry feet, which I won’t have until I buy new waders. Since I am, honestly, to cheap to do that any time soon, I will be soggy for years to come.
I am mostly kidding, of course. I love getting out and fishing a stream or lake. It is just wonderful to be outdoors and interact with nature in a unique way. Being that close to the water gives me peace and joy. I will keep going back no matter how few fish I catch. I probably won’t return to Little Papillion Creek anytime soon, but that is only because I didn’t catch fish, not because it wasn’t beautiful.
Fortunately, my frustrated mood didn’t last long. I picked up a four pack of Tallgrass Brewing Co. Buffalo Sweat and had a wonderful evening. It is a great stout. So refreshing in fact that I found myself craving it after a 6 mile run later in the day.

Now that is a good beer.

So another shot at Standing Bear. Last Sunday morning I went out and it was absolutely gorgeous. Perfect day. Not perfect fishing. No strikes. No rises. Nothing.

I walked east along the north shore of the reservoir. It got really muddy. No wind or current so wasn’t sending clouds of silt all over the place.

On my way out there last time, I noticed a creek (that I have since learned is Papillion Creek) a mile away that looked big enough to fish. My hunch is there isn’t much in there, but who knows? I figure, either tomorrow or Sunday I will go walk it north of the city to see if I can spot some fish and throw them something they like. Worth a shot, right?

This is the worst fly fishing blog out there. Ha. My waders leak and I can’t catch anything.

At least it is supposed to be another beautiful day out there.

Last Sunday the wife and went back to Standing Bear Rec Area. Sara did some reading at a picnic spot and I waded a 100 meter

stretch of the north shore. It was about thigh high and not too windy. The clarity was poor, and with the little chop, I couldn’t see any fish action on the water. I was casting a wet fly I tied last week using a size 6 hook, Zeeba Dubbing (hair from our cat’s brush), olive maribou, and some red and yellow neck hackle.

This was also my first attemp wading after sealing up the entire front seams of my waders. ankles to crotch. Result? The sealing cement is great and easy to work with. My waders may be beyond repair. I will try to reinforce the crotch and butt a bit more, but I may just have to settle with leaky waders until I have the means to replace them.

Anyway, with an hour and a half to fish, I worked the shallows and practiced my casting. It was 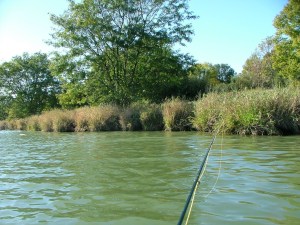 very slow. In the picture below, on the left hand side, you can just see the edge of a downed tree. I worked this area pretty hard and just as my attention was waning, I had a huge swirl at my fly. I was pulling it only a few inches below the water and the fish, not sure if it was a bass or carp, missed showing me a decent 13-15 inch dark colored back. I couldn’t get a profile view or see the tail, so I can’t say for sure what it was. But it had some decent size and surprised the crap out of me.

Another reminder to try and be focused when fishing. Regardless, it was a beautiful Sunday in Nebraska and I learned a lot about that part of the lake. I will be able to walk that pretty easily in the spring and think I should eventually find some luck at Standing Bear.